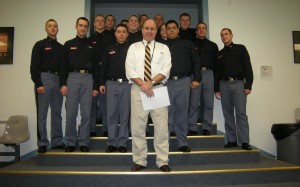 Tom Durwood is a teacher, writer and editor with a deep background in history. As editor and publisher of a small press (Ariel Books), he has edited four series of young-adult histories with over a quarter-million copies in print. He collaborated with Henry Steele Commager on a young-adult series of biographies, Americans (Barrons). He edited a series of Native American biographies (Silver Burdett) with Alvin Josephy, as well as a Great Authors series for Creative Education which included biographies of Beatrix Potter, Jack London and J.R.R. Tolkein. His Solutions series (Barrons) of biographies in science for young adults won an Honorable Mention from the ALA. Tom’s newspaper column “Shelter” appeared in the North County Times for seven years.

Tom teaches English Composition and Literature at Valley Forge Military College, where he has won the Teacher of the Year Award twice in the last three years. In December 2011, Tom was invited to the Naval War College to teach Public Speaking and Basic Communications as guest lecturer at a seminar for Naval Special Warfare Development Group members at the Dam’s Neck Annex.

Tom is Editor and Publisher of the online, open-access Journal of Empire Studies. Peter Suber, Berkman Fellow at Harvard University, an advocate of the open access movement, praises the journal as “a new opportunity for overcoming access barriers to knowledge and research.” Dr. Julian Fisher of Scholarly Exchange has also applauded Tom’s efforts. “Creating valuable academic content and then hiding it behind financial firewalls – the traditional scholarly publishing model — runs counter to the essence of scholarship, learning and sharing,” according to Fisher. “To see a journal such as the Journal of Empire Studies breaking that mold is exciting.”

Tom is a member of MLA, the International Studies Association, and the Author’s Guild. He presented a paper on the Brownsville Raid and Redemption on a Race and Trauma panel at the Modern Language Association convention in November, 2005. Tom earned his undergraduate degree from Harvard, where he edited an undergraduate arts journal and studied with David McClelland (Roots of Consciousness). He earned his Masters in English Literature in San Diego, where he also served as Executive Director of San Diego Habitat for Humanities.